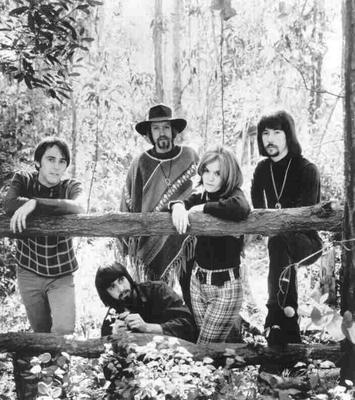 Their late '67 single "Turn On a Friend (to the Good Life)" again failed to chart, but overall they had still sold a fair amount of records for an American rock group of their time. With one album remaining on their Columbia contract, the PBC undertook recording sessions in New York and L.A. during the latter half of 1967. The result of these sessions was the late '67 GREAT CONSPIRACY album, hands down their finest work. This time the group played on every track and handled all the writing themselves. A national tour and the addition of new lead guitarist Bill Wolff (formerly of Sound Machine) had made the PBC a tighter unit instrumentally, and they were able to stretch out the arrangements accordingly. Among the best results were the gorgeous "Lonely Leaf", "Living, Loving Life", spacey "Too Many Do" and "Ecstacy". The lyrics could still be overreaching at times ("Firecracker sky / filled with roots of fusion / trash cans floating by / we're so far ahead we're losin'") but the songs were all melodically adventurous, running the gamut of chord changes and stops and starts. "Too Many Do" garnered significant FM airplay and was one of the first long cuts to be played on the radio. THE GREAT CONSPIRACY ultimately made it into the low 90s on the Billboard Pop Album chart.

The PBC played many high profile live shows in '67 and '68, including the famous Sky River Rock Festival in Sultan, Washington, and gigs at San Francisco's Fillmore and L.A.'s Whisky a-Go-Go. Brackett, Merrill and Robison also collaborated with producer/ arranger Stu Phillips, adding their trademark vocals to many of Phillips' movie scores. The group's final Columbia single was Brackett's kinetic "I'm a Fool", which found them moving in a more soulful direction with another stand out performance from Barbara. The 45 garnered extensive airplay on the west coast, but without much of a push from Columbia it could only chart as high as #125 on Billboard. Shortly after the "I'm a Fool" single had run its course, the group parted ways with Columbia.

Surfacing on the Warner subsidiary Challenge, with a revamped line-up featuring ex-Clear Light organist Ralph Schuckett and drummer Michael Ney (Stevens), the group recorded and released their final album FOR CHILDREN OF ALL AGES. The disc was written and conceived by Al Brackett without the assistance of John Merrill, though Merrill did play on it. The result was a hit-and-miss collection of white California soul, bolstered instrumentally by Schuckett's subtle B-3 fills. Explains Alan Brackett, "I had written a bunch of songs on (the most recent) tour and went into Hollywood Sound to record the demos for Four Star, my publisher. In the middle of this demo session, Dave Burgess-- VP and producer for Four Star on this session-- said, 'That sounds great! Bring in the eight track!' This was at the time when four track recording was just changing over to eight track, which was more expensive. All of a sudden we were making an LP. The tracks were sweetened and put out as the FOR CHILDREN OF ALL AGES LP on Challenge. This may explain to you why it was so different (from the other PBC albums)-- it was really just my songs and not really a planned PBC release."

Many of the album's highlights came courtesy of Barbara Robison, who was now no longer billed under her "Sandi Peanut Butter" alias. "It's Alright" and "Try Again" featured some of her most stunning leads. The new unit toured briefly, but to little avail. Like most of the other "food groups" of the 1960's (Strawberry Alarm Clock, Chocolate Watchband, Electric Prunes, Ultimate Spinach et. al.) as the novelty of their name wore off, good music couldn't overcome listener preconceptions in the face of a changing musical spectrum. They split up ca. 1970, with Merrill and Brackett continuing on in the business writing and producing for other artists. Robison toured with her new husband throughout the seventies to little recognition. Sadly, she passed away in 1988, ending any hopes of a full PBC reunion. We are also sad to report that original PBC drummer Jim Voigt passed away a couple of years ago.

"When you make the step alone, then you'll know just where you're going.

When you see things with your eyes, then they'll shine..."

If you don't automatically hear the music for this page, click here